Tamil people's distress and anguish reached its culmination when the library in jaffna was burnt completely , about 97,000 books turned into ashes in july 1 , 1981 , all those books were very rare collection of tamil literature.

In august 21 , 1981 hindu released this news " For the past 15 days , GoSL is killing tamils with no mercy , lot of tea estate workers are escaping through forests as refugees which is a natural habitat for posionous snakes

Prabhakaran was there with anton and atel in chennai and uma was there in chennai too. Prabhakaran met uma with kannan in a hotel in pandy bazaar , before uma maheshwaran , prabhakaran took his revolver and shot 6 bullets directed towards kannan's leg.Both of them were caught red handed by pandy bazar police.Jeyawardane was so happy at this news and he asked TN govt to hand over prabhakaran.Prabhakaran's dad rushed to TN and spoke with M.karunanithi ( opposition party leader ) .Baby subramaniam and pala.nedumaran took strenuous efforts to release them. Indira gandhi after being contacted by MK had already decided to release them because GoSL was leaning towards america , china and israel at that time which she felt as perilous to india's sovereignty.Both of them got released and amirthalingam came to chennai to recreate a bond between uma and prabhakaran which didint worked out.Prabhakaran was there with nedumaran for about 7 months in trichy.

October 1982 , sankar's house was rounded up by the army and he was shot in his stomach , he ran for about 3 Kilometers with bleeding and handed over the weapons to his fellow men and announced that he has finished his duty.He was taken to madurai , prabhakaran for the first time faced a blow , sankar was dead at his age of 22. At that point of time they cant announce this to anyone as LTTE hardly had 30 members . After 7 years they announced sankar's death ( november 27) as " Martyr's day " ( Maaverar thinam).

1983 july also called as Black july was the most organised pogrom in the history of tamils in lanka.It was said that , black july was a result of LTTE's ambush in july 23 which killed about 12 army men . Sinhalese started things in july 24 and they didnt stop for the next seven days. They all had a ferromagnetic effect in these days , they vandalised tamil shops and houses and they never forgot to burn the same after they finished their job.Rapes were much more common in these days and this incident made a strong impact and even convinced tamils that armed fight is the only solution for their problems. 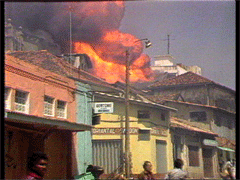 The genocide was at its peak when 35 tamil prisoners in weliakde were beaten to death by sinhalese prisoners under the proper guidance and ashirwatha of the police officials .All of them knew kutti mani and hence they tortured him by first taking his eyes off the body with knife .Jail warden himslef bet mayilvaganan , a teen age boy ( 16) to death and all the corpse were buried under buddha statute 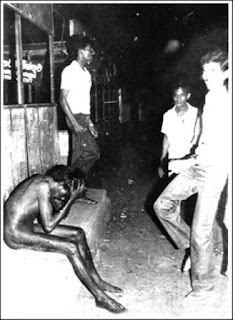 GoSL announced that 350 people were dead , 18000 houses and shops were destroyed and one lakh tamils are now refugees .But every sane person across the globe knew how to multiply these stats to get the real picture. Atleast 2500-4000 were dead and more than 1.5 lakh people turned out to be refugees.M.karunanithi pressurised indira to take action and MGR said that all 5 lakh tamil hearts are shedding tears of blood for what happened in lanka.

August 2nd Indira gandhi called upon amirthalingam and promised that india would give medicines and financial support. Jeyawardane was really irked by this meeting and indira spoke to him but there was no positive response.She decided not to interfere in the internal affairs of lanka ......... explicitly!

September 1983 , TN was full of refugees from lanka , RAW cautiously separated common people form people belonging to liberation organisations and took them to delhi.The training period was really a boon to them as it covered a lot of activities including handling various revolvers , guerilla war methods etc.This was the time when Anita pratap met prabhakaran.She was really surprised to know when prabhakaran said that LTTE may have to fight with india.( She was a courageous reporter who revealed about many balck july incidents to this world)


P.S : Thank you dinesh for your valuable suggestion .Am adding photos now.Links will be given later people. :)

Labels: Ethnic conflict in lanka and its roots